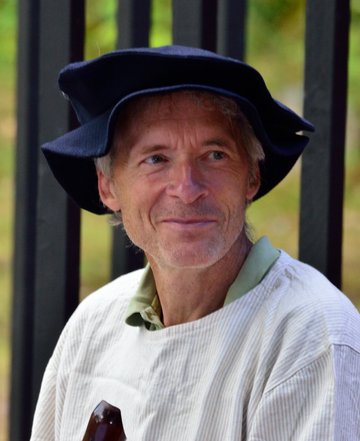 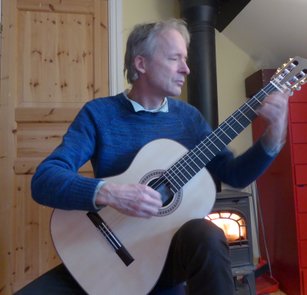 At home with the guitar

About
I started playing guitar for my neighbor when I was 11 years old. After that, I was a "practice student" at SMI (University College of Music Education in Stockholm) during the early teens, where my teachers were those who trained as teachers. During my adult life, I have only taken a few lessons for Stefan Löfvenius. To a large extent, I have taught myself. I have not attended any music academy, not studied for a single famous master abroad and not received any prestigious awards. (yet...)


During my time in high school, I often sat at home and improvised. A great source of inspiration then became Egberto Gismonti who I heard at some concerts and whose music filled me with a tickling energy. Ralph Towner and his group Oregon have also inspired me a lot.


In a music store, I once found a 13-string alto guitar (tuned in G), built by Georg Bolin. I immediately fell fell in love with its sound and bought it. On that instrument I now play a lot of my own music. The compositions often emerge in long improvisations where a theme sets out on an adventure. Often the music then contains improvised sections. I also like to play pure improvisations at concerts, which I then usually call "The Inspiration of the Moment".

After studying music pedagogy (recorder!) At SMI, musicology and biology at Uppsala University, I have worked as a bat inventor, choir leader, guitar teacher, musician, personal assistant, biology teacher, administrator, carer and exam guard. The music calls more and more to me and I would like to play more.
My music is in the borderland between classical, jazz and folk and has in addition to the above been inspired e.g. of Renaissance music, Bach, Debussy, Ravel, Stravinsky, Corea, Metheny, Laginha, Kalaniemi, Saluzzi and many, many more.

My philosophy of life:
1. I exist
2. Since I exist, I must try to have a good time
3. In order for me to have a good time, those around me should feel good. So treat everyone well, play beautifully and delight yourself and others!